On the day that Dan was born, in 1955, he was destined to be a Nordic skier. His family skied and even his doctor made some cardboard skis & strapped them to baby Dan's feet.  Dan excelled at the sport and was honored to be part of the US Nordic Ski Team in 1974 and the Combine Team in 1975.  The ski team was the first American Team to go into Russia.  Dan ranked as the #1 U.S. Nordic Combine Skier for 3 years and finished 10th in the World!   Dan competed for a position on the Olympic team, but was disabled when he broke his foot on a record setting jump.
Playing high school football was another favorite of Dan's, wearing #52 for his team and playing positions at center, middle linebacker and kicker, at Middle Park High School in Granby, Colorado.
When the opportunity arose to get into the cattle business, Dan jumped into it whole-heartedly, raising and feeding cattle and farming to raise alfalfa hay.  Dan owned and ran Keenan Kattle Kompany near Rifle for 28 years & owned his own truck to haul cattle from the high country.
Dan drove trucks throughout Colorado and nation wide for 39 years, specializing in hauling difficult heavy equipment on long distances and in rough mountain terrain.
Both of these careers allowed Dan to be in the great outdoors, that he loved, until the diagnosis of A.L.S. (Lou Gehrig's Disease) in 2010.
On November 26, 2012, Dan lost his battle with ALS.  Dan's family said the he kept a positive, upbeat attitude and brought joy to those he knew.  Dan was a wonderful husband, father and grandfather too.  His family was so important to him and it showed, with all the love returned to Dan, by his family, as his physical abilities become more limited.  With ALS, even eating and breathing becomes a challenge.  Dan's care required the constant attention of his family and friends with special equipment to assist him.
A wheelchair accessible van was purchased, with a loan that requires re-payment in full. When the van is paid off, Dan's dream can begin to be fulfilled - his dream of sharing that van with other Western Colorado ALS patients who need help with mobility.  This selfless cause is a testament of Dan's caring nature.  The van will be maintained with the Fund, honoring Dan Keenan and his determined desire to help others. 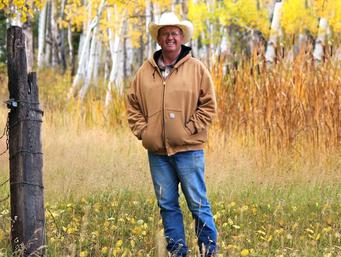 Keenan Kattle Kompany, and some of Dan's Trucks and cows.
1

Bringing Mobility to Western Colorado A.L.S. Patients
Dan's dream.....
to help others and
"Pay it Forward"